Season 2. 10 episodes.
Cast: Amy Sedaris, Cole Escola, Ana Fabrega
Why it’s great: At Home with Amy Sedaris doesn’t have a “plot” as much as it has running gags about different facets of homemaking — cooking, millinery, crafting, knife sharpening, what have you. Each episode features Amy’s “neighbors” popping in to demonstrate their unique skills and one-upmanship. Cole Escola is especially funny as the needling Chassie Tucker, but any of the banter with guest stars and their absurd bits makes At Home a goofy delight.

Season 6. 8 episodes.
Cast: Derek Waters, guests
Why it’s great: It’s a concept so simple, it’s worked for six seasons: Get a bunch of people drunk and ask them to explain an important historical event. Reenact it exactly as it’s drunkenly told. Comedy will follow. Host and creator Derek Waters has built the former web series into such a powerhouse that its season 6 premiere counted Evan Rachel Wood, Will Ferrell, Elijah Wood, and Seth Rogen among the actors recreating the story of Mary Shelley’s Frankenstein as told by a wasted Rick Fulcher. If you’re a fan of the show, you know what to expect: Slurred retellings of famous historical narratives like the Black Sox scandal, JFK’s relationship with his personal physician, and the founding of the National Park Service. 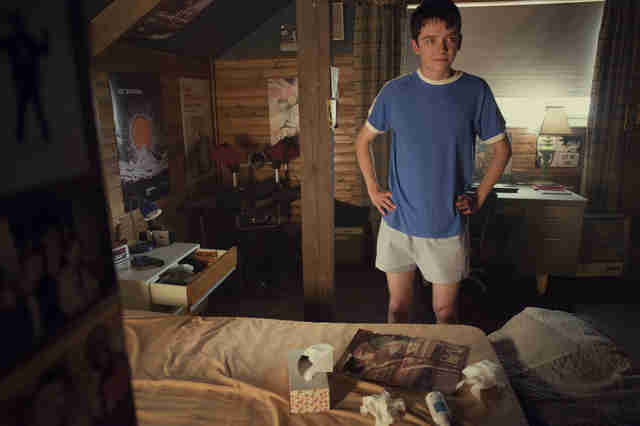 Season 3. 7 episodes.
Cast: Fred Armisen, John Mulaney
Why it’s great: Documentaries often come off as self-parodies (see: History of the Eagles, the source material for Documentary Now!’s Season 1 closer, “Gentle and Soft: The Story of The Blue Jean Committee”), so making an actual parody series about some of the most well-known documentaries was bound to be a hit. Coming from SNL vets Hader, Armisen, Mulaney, and Seth Meyers, Documentary Now!‘s third season hits its stride right away with a riff on Netflix’s hit docuseries Wild, Wild Country — complete with a bearded Owen Wilson as a cult leader and the excessive drone footage that seems requisite for any contemporary doc. It’s these little touches and details that make you appreciate how well-crafted this show really is, which is probably why it’s able to attract big-name guest stars like Cate Blanchett and Michael Keaton. 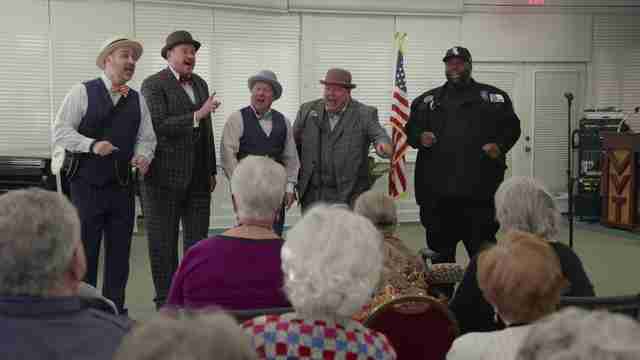 Season 1. 6 episodes.
Cast: Michael Render
Why it’s great: Trigger Warning lives a lonely existence as the sole scripted nonfiction series on this list, but goddamn if it isn’t a stroke of genius. At first, it’s hard to tell just how much Killer Mike, half of the rap duo Run the Jewels, is goofing around — after all, his socially conscious activism is absolutely grounded in the very real injustices taking place in America. But the show quickly hits its stride in its audacious ideas reminiscent of the best episodes of Nathan For You, like improving the efficacy of job training through pornographic skills videos, bridging a divide between the Crips and Bloods through good ol’ fashioned capitalism, and founding a new church that undermines Christianity’s bullshit white Jesus idolatry. The social experiments culminate in the season finale where Mike starts a new nation and recruits some of the series’ weirdest (real) characters to join him. The point here is: renew Trigger Warning for Season 2 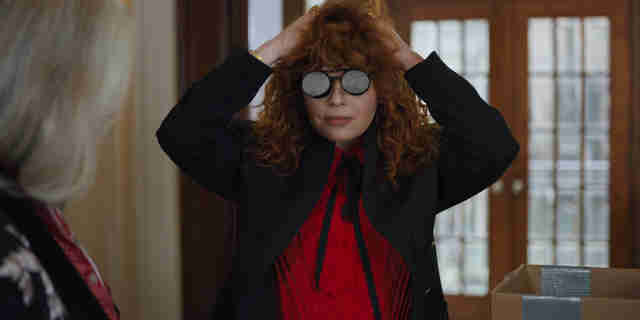 Season 1. 8 episodes.
Cast: Natasha Lyonne, Charlie Barnett, Elizabeth Ashley, Greta Lee, Chloe Sevigny
Why it’s great: If you love dark comedies that lean hard into both the “dark” and “comedy” aspects of the genre, then Russian Doll, co-created by Natasha Lyonne, Amy Poehler, and Leslye Headland, is the show for you! On her 36th birthday, the cynical and wise cracking Nadia (Lyonne) gets hit by a car and dies, setting in motion a loop of the same day that always starts in the same vaginal bathroom of her friend’s apartment while Harry Nilsson’s “Gotta Get Up” repeats. In cracking the key to her purgatorial state, Nadia stumbles across Alan (Barnett), who’s dying repeatedly the same as her, and together, they work to get the bottom of how and why they’re connected to end the cycle of mutual doom. Jokes run the gamut from Lyonne saying “cockroach” (cock-a-roach) and wryly delivering one-liners (“Ah, Thursday… what a concept!”) to physical gags, like Nadia brutally choking on a chicken bone. It’s a rare Netflix original that’s truly great, crossing into metaphysical territory, and doesn’t overstay its welcome — at a lean 8 episodes, each clocking in at 30 minutes or less, it’s easy to binge over and over, much like Nadia’s deaths. 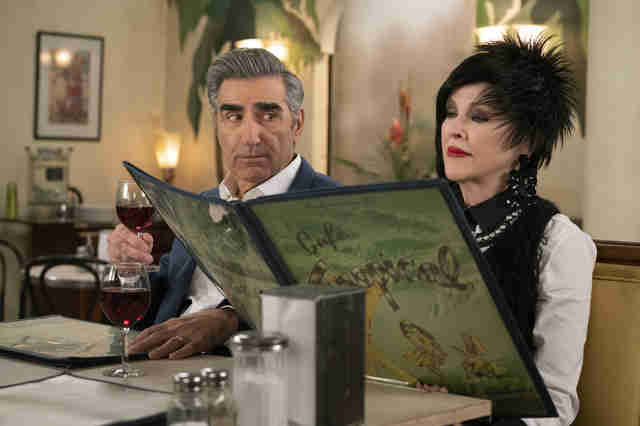 Season 5. 14 episodes.
Cast: Catherine O’Hara, Eugene Levy, Daniel Levy, Annie Murphy, Chris Elliot
Why it’s great: Any time you have the chance to watch a comedic genius flexing the full range of her abilities, you should take it, and Catherine O’Hara flexes hard as Moira Rose in Schitt’s Creek. The story of the formerly wealthy Rose family’s struggle to adjust to life running a motel in a small Canadian town they bought for their son back in the early ’90s continues to find outlets for O’Hara’s talent in its fifth and penultimate season. Johnny Rose (Eugene Levy) dutifully plays reliable straight man to O’Hara’s Rose, who’s only become more eccentric and less self-aware after filming a low-budget horror movie in Bosnia. Meanwhile, grown children David (Daniel Levy, the show’s co-creator and Eugene’s son) and Alexis (Murphy) live in suspended privileged adolescence while still sharing a room in the motel. It’s the perfect vehicle for the cast’s whip-smart comedic instincts, while doubling as a roast of the extremely wealthy. Canada knows how to pump out comedy gold!

Season 1. 10 episodes.
Cast: Maya Erskine, Anna Konkle
Why it’s great: The central visual gag in PEN15 falls a bit flat for the same reason the show finds so much humor in the middle school years: It’s such an awkward time that some kids really do look WAY older than everyone else! Playing versions of themselves among a sea of actual 13-year-olds, Erskine and Konkle dive headfirst back into seventh grade circa 2000, when drama felt so much more dramatic and every social faux pas could forever brand you as uncool. The show, which counts The Lonely Island among its executive producers, hits on many of the topics you’d expect of a coming-of-age comedy: masturbation, young love, AIM, and cigarettes, to name a few. But it’s the awkward delivery, the attention paid to the feelings and hormones coursing through the veins of the characters, that inspire some of the funniest moments (like when Maya and Anna come into possession of a thong and don’t want to give it back). It’s uncomfortable and funny and painful and wistful, probably like your memories of middle school. 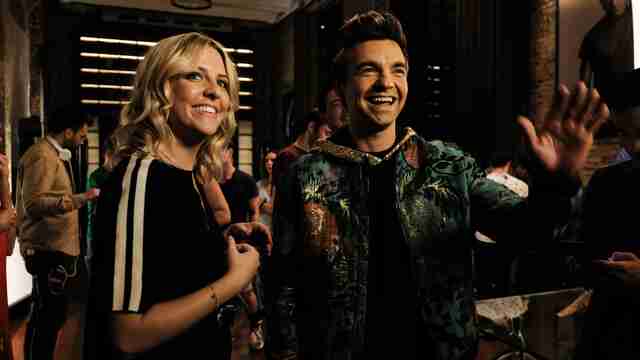 1. The Other Two (Comedy Central)

Season 1. 10 episodes.
Cast: Drew Tarver, Heléne Yorke, Molly Shannon, Ken Marino
Why it’s great: Who hasn’t wondered what life would be like if they had a younger sibling who became a Bieber-esque global superstar? Comedy Central’s new sitcom takes this question and runs with it, focusing on the lives of Cary (Tarver) and Brooke Dubek (Yorke), two struggling older siblings of Chase Dreams, a kid who becomes a sensation after his song “Marry U at Recess” goes viral. Both a brutal satire of online fame and a thoughtful exploration of family and loss, The Other Two is a sharply written show equally at home making fun of skeevy agent Streeter (Marino) and dealing with the fallout of revealing a long-kept family secret. Don’t sleep on The Other Two, which has already been renewed for a second season that will probably not be called The Other Two: 2.

Sign up here for our daily Thrillist email, get Streamail for more entertainment, and subscribe here for our YouTube channel to get your fix of the best in food/drink/fun.